April 2021Real Estate NewsBrought to you by Scott Beard

Which states have the lowest cost of living?

For many of us, the past year has brought about a slew of unexpected changes. The pandemic didn’t slow rising home prices or increase the amount of available inventory in major metro areas, but what it did do was dispel the idea that all office workers must be tethered to a physical location.

With remote work becoming more and more normalized, many Americans are wondering why they’re paying exorbitant housing costs for less space, less privacy, and less stability. With that in mind, let’s take a glance at the most affordable places to live in the United States by cost of living index*.

Mississippi: With a cost of living index of 84.8 (the national average is considered 100), Mississippi has the lowest housing costs in the country and has held the top spot for years. You can expect to pay around $134,000 for a home, so if you’re looking for a new home town where your money can go further, Mississippi might be for you.

Oklahoma: Oklahoma has the second-lowest cost of living in the U.S, with an index of 86.1. You can expect to pay $142,000 for a home in Oklahoma, meaning you’ll be able to afford that tailgating rig sooner than you planned.

Arkansas: Coming in third is Arkansas. The cost-of-living index is 87.8, and transportation, housing, and health care costs are all lower than the national averages. It’s estimated that for a family to live comfortably in the state they would need to make around $44,571 a year. Arkansas also offers a screamin’ deal on milk at an average price of $1.75 a gallon.

Other states with a low cost of living are Kansas, Missouri, Georgia, Alabama, New Mexico, Tennessee, and Indiana.

*Cost of living indexes are meant to compare the expenses an average person can expect to incur to acquire food, shelter, transportation, energy, clothing, education, healthcare, childcare, and entertainment in different regions.

It’s a timeless and universal truth: moving is no fun. Ancient Polynesian seafarers, while nervously prepping outrigger canoes for uncharted trips across the South Pacific, probably groaned in frustration when they realized at the last minute that someone forgot to pack up all the fishing gear.

Sure, locating to a new place can be an exciting adventure, but the actual moving process can be stressful, costly, and full of surprises. Make your next move as smooth and simple as possible by avoiding these pitfalls: 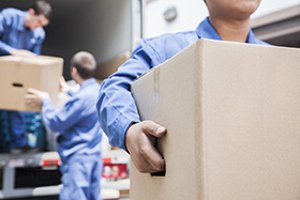 Hiring a shady mover. Moving scams can run the gamut from bogus “moving deposits”, to bait-and-switch estimates, to overly-complicated contracts designed to nullify mover liability. You can steer clear of a less-than-upstanding mover by doing your homework. The Better Business Bureau, Angie's List, your state transportation regulator, and the U.S. Department of Transportation - and even your relatives, friends and neighbors - are all good sources of information about whether a moving company is on the up-and-up. Doing some homework online can save you a lot of heartache.

Failing to schedule your move well in advance. During the summer months, good moving companies are booked up quickly. Rather than waiting until the last minute, make sure your move is scheduled weeks - or better yet, months - in advance. You don't want to be scrambling to find a mover the day before you're supposed to head out.

Packing too much stuff. Do you really need those old boxes of baby clothes that you haven't laid eyes on since your 6-year-old was in diapers? Before you move, "edit" your belongings. Think about whether you can trash some of your possessions, donate them to charity, or give them away to friends and relatives. Consider holding a garage sale to clear out some of the clutter. If you haven't seen, worn, or used something in a year, think hard about whether you need to keep it - and whether you need to haul it to your new place.

Ignoring the need to pack ahead of time. You'll find very few people who'll say that packing is fun. In fact, a survey commissioned by SpareFoot found that people who moved in the past year identified packing and unpacking as the biggest hassle in the process. (Our ancient seafarers would probably agree.)

You can lessen the load by beginning to pack well before moving day comes along. Start by boxing up stuff that you won't need right away - for instance, if you're moving in the summer, pack up your winter clothes so that they're out of the way. If you get down to the wire and need help with packing, enlist friends, neighbors, relatives, or colleagues to lend a hand. Just make sure you have plenty of pizza and cold beverages on hand. If you can't rustle up any free help, consider hiring laborers to do the packing for you; that may be a small price to pay to alleviate moving-related stress.